NW Juniors is happy to announce the addition of Nicole Salmon to our staff as our Boys Program Director. Nicole will be responsible to help implement and grow our boy's indoor program. The club has also made our Bottega Beach facility available so that boy's growth can extend to outdoor beach programming in the Spring and Summer.

Keep an eye on this "Boy's Programs" page for updates on all of our new Boy's programs.

For specific questions about the program, you can contact Nicole directly:
Email: Nicole Salmon, nbsalmon4@gmail.com
Phone: 630-450-1358 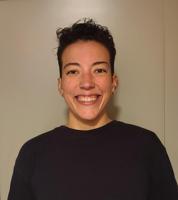 I had been given the wonderful opportunity to play volleyball for 7 years. That career included being a 4 year Varsity as a starting outside hitter, a top Illinois recruit and a small stint at the Division 1 level. While my collegiate career was cut short, it has given me the gift to continue being just as passionate about the sport in a new form.

I began my coaching career in 2011 with Sports Performance Volleyball Club in Aurora, IL. I spent my first two years coaching the U10-U12 girls to learn the basics and to start developing my coaching philosophy. For my third year, Sports Performance made a huge push to grow their boy’s volleyball program at an elite level and I hopped on board for the ride. It was the best decision I ever made in my career.

Along with the Boys Volleyball Director, we grew the newly formed Elite Program into a multi-year, gold-medal winning program. I learned what it takes to teach young players the skills at a high level while allowing them to enjoy what they do so that success isn’t forced or an indicator of their self worth as a human. Winning was not our most important concern. It was a by-product of our determination to teach them patience, discipline, and sportsmanship. Those same kids I began with are now flourishing at the college level and beyond.

In 2019, I wanted to expand my horizons and bring the love and success I had with boys volleyball in the Midwest to the PNW. I stepped into a gym that had 3 middle school aged boys who had no issues competing alongside the girls, but I saw half a boys team and ran with it. Through determination and a grassroots marketing effort, the program grew to over 20 boys and continues to grow today. I have high ambitions to capitalize on the fact that boys volleyball is the fastest growing sport in the country. With my new partnership at the distinguished Northwest Juniors, that lofty goal will become a reality. I’ll continue to develop a healthy, integrated relationship with the other Boys Program Coordinators of the Puget Sound Region and beyond so that we may all see the beautiful growth and success that this sport deserves.

There's a lot of volleyball happening this spring and summer for both boys and girls. But this year is a little different, Nicole joined our team as our Boys Volleyball Director.  And this means...we've got dedicated boys training!

Registration is OPEN for our Spring and Summer programs

**Code is exclusive to "boys only" weekend clinics and summer camps**